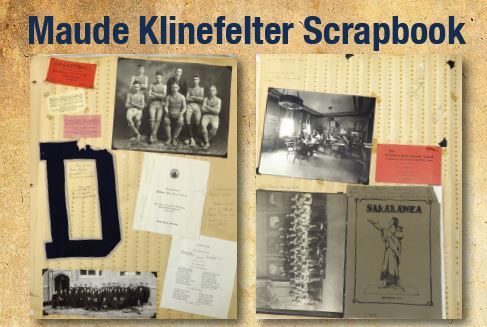 A scrapbook compiled by Maude Klinefelter, who worked at what is now Dickinson State University from 1918-1959. The scrapbook contains photographs of faculty, staff, buildings, and classrooms; documents; letters; programs; newspaper clippings; issues of the Sakakawea magazine. It also includes the 1916 official ballot for the constitutional amendment to create a normal school in Dickinson. Items in the scrapbook are identified by Miss Klinefelter's handwritten notes. This is the most important collection of material about the college's early history. Maude Klinefelter was hired as secretary, treasurer, and registrar of the Dickinson State Normal School when it was first established in 1918. She worked in this capacity until 1954. For five years after that she remained on the staff as Director of Correspondence. Klinefelter died in 1961 and a scholarship fund was started in her honor.